A cookie is information stored on your computer by a website you visit. Cookies often store your settings for a website, such as your preferred language or location. This allows the site to present you with information customized to fit your needs. As per the GDPR law, companies need to get your explicit approval to collect your data. Some of these cookies are ‘strictly necessary’ to provide the basic functions of the website and can not be turned off, while others if present, have the option of being turned off. Learn more about our Privacy and Cookie policies. These can be managed also from our cookie policy page.

Now, that it is daylight saving time, make sure all of your clocks are moved forward 1 hour, and don't forget to check your smoke alarm and carbon monoxide alarms and change their batteries!

Are your batteries fresh?

Even hardwired alarm systems need battery back-up if the power goes out. Replace the batteries in all of your alarms at least once a year, or any time the unit indicates the battery is low.

The general rule is to replace the batteries when you change your clock for daylight savings time and/or when you switch your clock back.

Now, that it is daylight saving time, make sure all of your clocks are moved forward 1 hour, and don't forget to check your smoke alarm and carbon monoxide alarms and change their batteries!

Are your batteries fresh?

Even hardwired alarm systems need battery back-up if the power goes out. Replace the batteries in all of your alarms at least once a year, or any time the unit indicates the battery is low.

The general rule is to replace the batteries when you change your clock for daylight savings time and/or when you switch your clock back.

When the battery needs to be replaced, you must remove the old battery and replace it with the same battery type.

Tip: Many newer smoke alarms are sold with 10-year sealed batteries. This is considered the life of the alarm and the whole unit should be replaced every 10 years.

All alarms should have a date on them, so test them monthly and make sure you know the expiration date.

No time to spare. Plan and practice your home escape plan today!

If a fire occurred in your home, would your family get out safely? A fast, pre-planned escape is critical to survival.

Once the smoke alarm sounds, you could have less than 2 minutes to get out safely. In a fire, there is no time to spare and there are no second chances!

Markham Firefighters remind you and your family to have and practice your home escape plan. 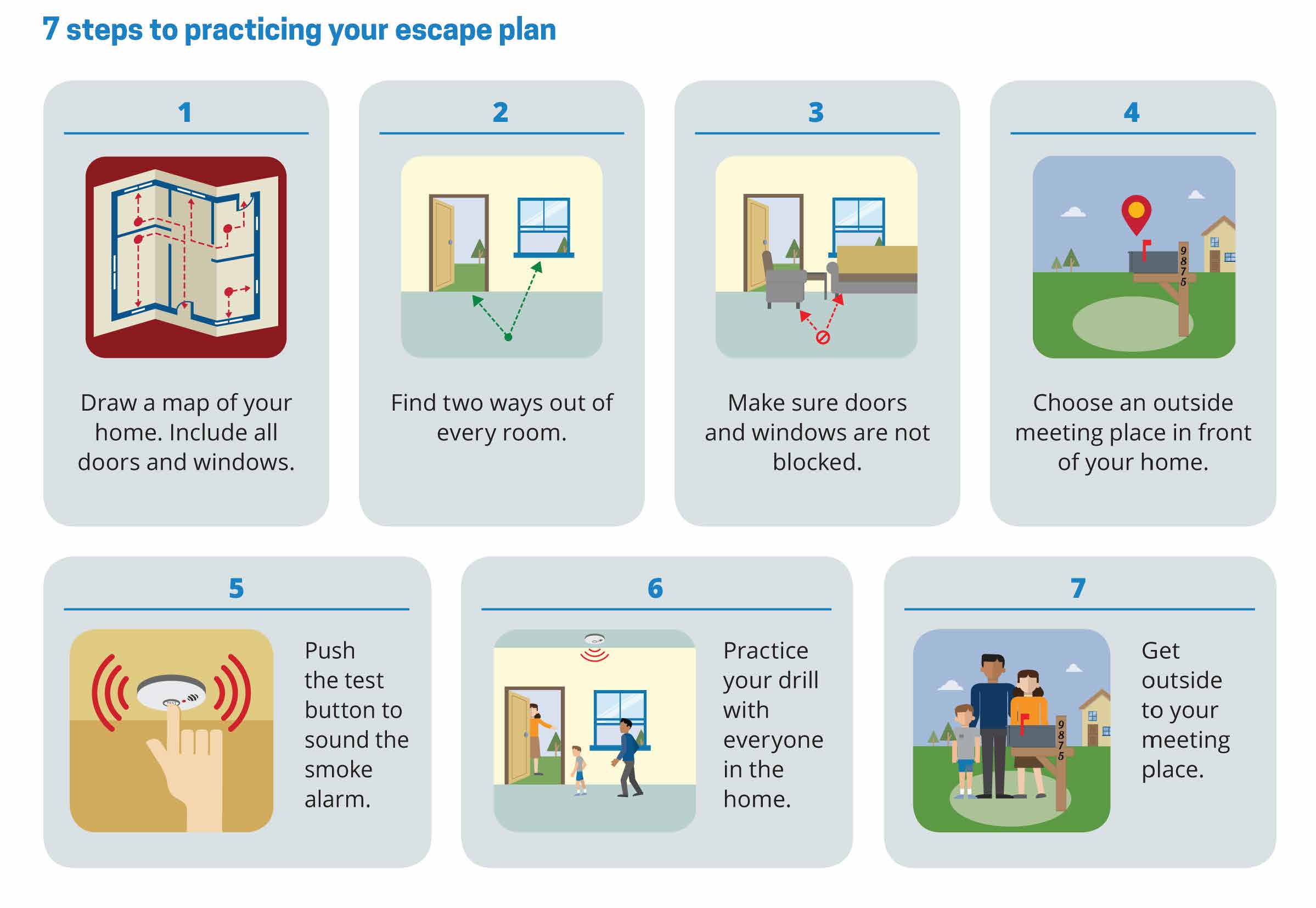 Fire in your house? ... Fight or Flight?

Attempting to extinguish even a small fire carries some risk. Fires can increase in size and intensity in seconds! They can block your exit and create a hazardous atmosphere that could become fatal.

Portable fire extinguishers are a first aid device and provide a first line of defence against small fires. When used properly, an extinguisher can save lives and property by putting out a small fire before the firefighters arrive.

Everyone except the person fighting the fire should leave the premises. If you have the slightest doubt about your ability to fight a fire, evacuate immediately and close the door behind you.

The basic methods for extinguishing fire are to suffocate it by ensuring that it cannot have access to oxygen, to cool it with a liquid such as water which reduces the heat, or to remove the fuel or oxygen source.

One of the most common methods of extinguishing an ordinary combustible fire is by reducing the heat or cooling the fire with water.

However, not all fires should be extinguished with water.

Grease fires are extremely dangerous because the fuel source (the grease) is a liquid, and can easily splash if you try to spray water on it. Grease fires burn very hot and can quickly spread to cabinets or other flammable areas of the kitchen.

If you have a grease fire, put a lid on it. Carefully slide the lid over the pot, turn off the burner and leave the pot on the stove.

Do not try to carry the fire outside. Trying to carry a pot or pan full of burning oil will slosh the burning oil inside the pot that can splash the grease fire on you.

Learn more about fire safety in the kitchen.

Smothering the fire with a wet blanket, or putting a lid on a cooking pan fire, or leaving the oven door closed can limit the amount of oxygen the fire gets. By reducing or removing the oxygen Class A or Class B fires will eventually go out.

A multi-purpose fire extinguisher or a carbon dioxide extinguisher will help to displace oxygen. Some dry chemical agents also create a coating effect which can effectively shut out oxygen.

Turn the burner or stove off to remove the heat.

Turn off the fuel supply line on a BBQ tank to shut off the fuel and starve the fire. This will limit the size of the fire and assist in putting it out.

Once a fire starts, if you can't put it, out leave immediately.

The ABCs of Fire Extinguishers

Fires are classified into categories based on the fire’s fuel source. Keep fire safe by having the appropriate types of equipment that are designed to put out specific types of fires.

Class A Fires – Extinguish with Water

Class A fires ignite from common fuel sources such as wood, trash, fabric, paper and plastics. Class A flames burst out accidentally. Trash and dumpster fires are common examples of Class A fires.

Extinguish a Class A fire with water.

Class B fires result from flammable liquids or gases. Flammable liquids include petroleum-based oils or paint, tars, alcohol, oils, solvents, gasoline and kerosene. Flammable gases include butane and propane. When a Class B fire sparks, extinguish it by smothering the flames, which will help deplete oxygen and prevent it from growing.

Never attempt to extinguish a Class B fire with water.

Class C fires are also known as electrical fires. Flames in Class C fires can start from a number of sources including:

• Running extension cords under carpet or other flooring, and

• Using a light bulb with a higher wattage than is recommended in light fixtures.

Electrical fires are especially dangerous because your first instinct may be to use water, however because water conducts electricity, this will actually cause the flames to spread. To put out an electrical fire, you should:

It takes only two minutes for a fire to turn from manageable to life-threatening, and only five minutes before the house is engulfed in flames. The heat and smoke from a fire are also extremely dangerous. Smoke inhalation can suffocate you, and the super-heated air can burn your nose and lungs. If you have a fire extinguisher in your home, you should learn how to use it correctly. Never let the fire get between you and your exit!

Sweep side to side 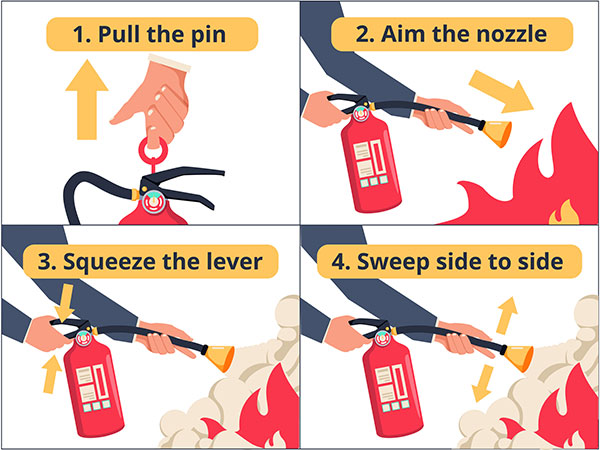 Markham Fire recommends calling 9-1-1 immediately if a fire breaks out in your home.

If you attempt to put out a fire by yourself, act quickly, and keep yourself between the fire and an exit so you have a quick escape. If the fire does not begin to die down almost immediately, get out and stay out. Nothing in the house is worth saving more than your life.

What does a Fire Prevention Officer do?

Fire prevention is a key component in fire protection. Fire Prevention Officers play a key role in fire protection and public safety. They have expert knowledge about the Fire Code and how it is used. Fire Prevention Officers make assessments and decisions about fire and life safety in the buildings in our community. These decisions may involve immediate threats to life, building closures and fire and environmental issues.

Our Fire Prevention Officers work closely with property owners to mitigate the risk of fire and ensure fire protection systems in buildings are operational, and they ensure people can evacuate safely in the event of an emergency.

Our team of Fire Prevention and Public Education Officers continues to grow. Collectively, we can communicate in six different languages: English, Cantonese, Mandarin, Greek, Italian and Turkish. Maintaining lasting partnerships within our communities and promoting public education programs and materials in a number of different languages including Farsi and Tamil are important to us.

One of the best and easiest ways to reduce the number of fires and protect Markham residents to keep our communities fire safe, is to keep everyone educated and aware about fire safety.

Find more information and tips on fire safety and community education at markham.ca/fire. 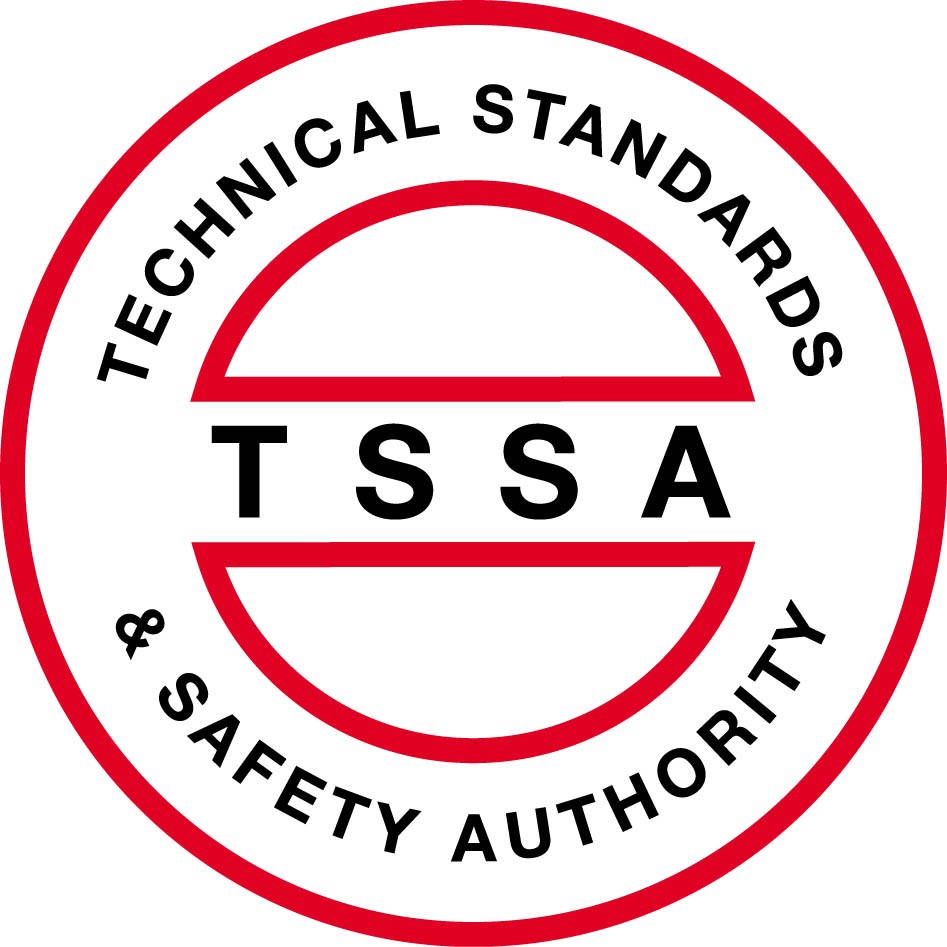 The Ontario Office of the Fire Marshal website shares tips to keep you, your family and your home safe all year round. 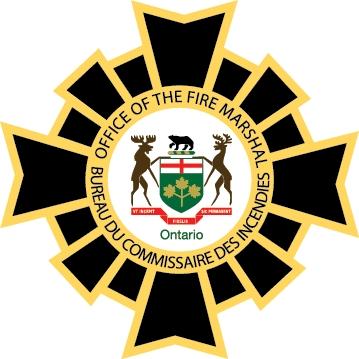 MFES In the News 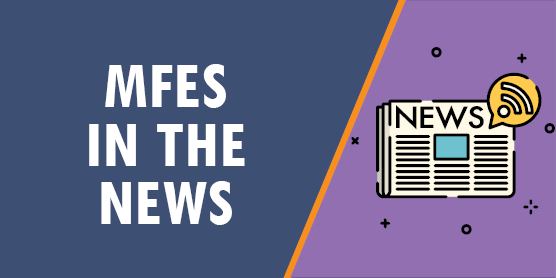 If Children Were in Charge - Read it Here! 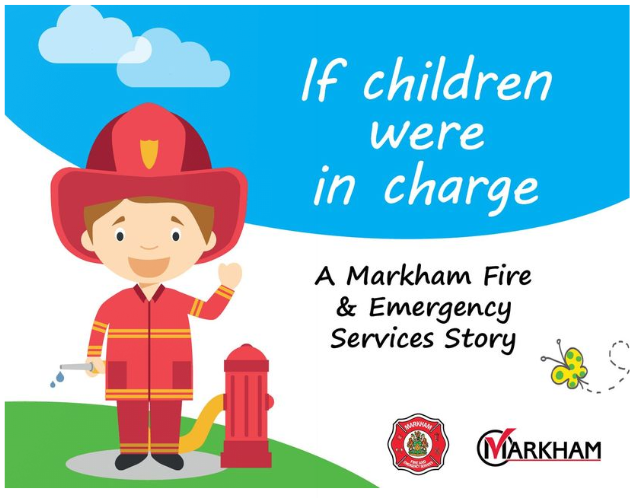